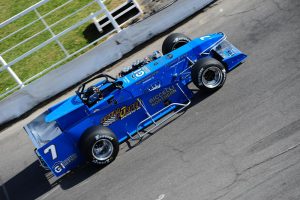 Starting 15th in the 22-car Novelis Supermodified Independence Day 75-lapper at Oswego Speedway Saturday night, Otto Sitterly made some moves late in the race – which went green to checkered without a single caution – to finish P8 in the last extra-distance main event of the regular season.

Entering the night with a slim 0.5-point lead over Michael Barnes, Otto drove the straight-axle Hawk Jr chassis and was fastest in both practice sessions with ultra-quick laps in the 16.4-second bracket in both open-pit sessions.

But success in practice did not turn into a favorable race night for the Royal Purple / G&I Homes / Riccelli Northern / Nicotra Racing No. 7.

Starting P2 in the heat, Sitterly was pushed nearly into the outside wall on entrance to turn 1 at the start of the 12-lap prelim. Contact with the other driver would send both drivers to the rear on the restart, which ultimately led Otto to a P5 finish in the race and a P15 starting spot for the main event. 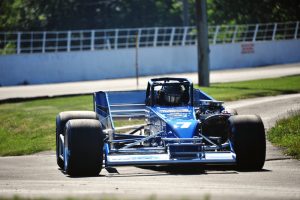 With passing still mostly at a premium in 2016 at Oswego, Otto would be mired outside the top 10 for most of the contest. Riding in the 13th position on lap 55, Otto began to make some moves as other competitors began to fade. He passed Jeff Abold to move into 12th on lap 56, then made it past Dave Danzer, Kody Graham and Keith Shampine by lap 60 to advance to P9.

The remainder of the race was spent working on the No. 12 of Pat Lavery, who Otto would pass with only two laps to go to move into P8. That was all Sitterly could do on this night, which in a rare occasion did not include a caution flag to bunch up the field, and give Otto more opportunities to advance. 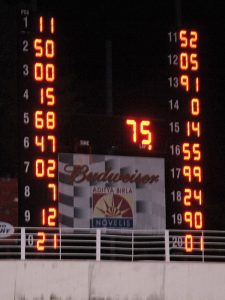 Next up for the Royal Purple / G&I Homes-backed team is the Summer Championship 50-lapper Saturday night, July 16. Otto will continue to be in search of win No. 1 on the season as we enter the second half of 2016.