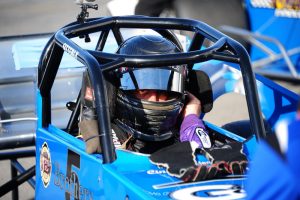 Sitterly started P8 and within several laps had moved past the likes of Brandon Bellinger and Dan Connors Jr. to move into the top five. By lap 8 Otto settled into the P4 position behind Keith Shampine and would remain in the spot for the remaining 42 circuits of the 50-lapper.

“We had a fourth-place car,” Otto told OswegoCountyToday.com reporter Chris Porter after the race. “Starting position means so much these days and I think any one of the first four cars could have won tonight with the right starting spot. The car wasn’t bad; it’s been crashed and tore up a lot this year, and I think we missed it a little tonight. The stagger was right but I think the track was good tonight and we were just off that little bit.”

Otto’s fifth top-5 finish of 2016, coupled with a P3 result in the heat race, allowed the Nicotra team to gain a handful of valuable points in the Oswego Supermodified point standings.

Next up is the biggest race of the 2016 regular season – the July 23 $10,000-To-Win Mr. Supermodified 50-lapper. Otto will be looking for his first feature win of the year and an opportunity to regain the championship point lead. Sitterly is the defending champion of the Mr. Supermodified race and he also won the race in 2013 with Nicotra and in 2006 with his own team.