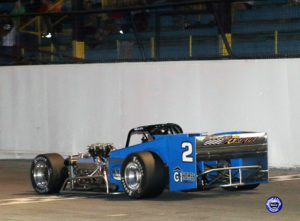 OSWEGO, N.Y. – North Ridgeville, Ohio’s Dave Shullick Jr. narrowly avoided a major wreck on lap 15 and passed Mike Muldoon Jr. on lap 50 to win the Independence Grand Prix 75 for Novelis Supermodifieds Saturday night, July 1, at Oswego Speedway. The win marked Shullick’s third of the 2017 season behind the wheel of the Royal Purple / G&I Homes / Riccelli Northern / Nicotra Racing No. 2 and have him leading the Oswego Supermodified point standings after four nights of racing.

“The car was great tonight,” Shullick said in victory lane. “We were very fortunate to get through that wreck. I may or may not have closed my eyes a little bit over there. Sometimes you need a little luck to make it through those ones and we had some luck tonight. I was a little free early on, but toward the end we pulled away and it ended up being pretty good.”

The wreck Shullick missed involved his teammate and seven-time track champion Otto Sitterly. Early in the race Sitterly was on a march to the front and appeared to have the fastest car on the track when contact with Brandon Bellinger sent him spinning and Bellinger hard into the outside wall. DJ, who was riding right behind the two drivers when the wreck occurred, would thread the needle between Otto’s Nicotra Racing No. 7 and Bellinger’s No. 02, barely missing contact with both cars and keeping him in the race. 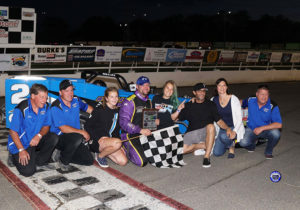 Once the accident scene was cleared and green-flag racing returned to the speedway, Muldoon built a large lead over the rest of the field while Shullick resumed his march through the top five. He would pass Joey Payne and Dave Gruel before lap 30 to settle into second and eventually take the lead from Muldoon with an inside pass to take the lead and drive to another victory.

“When I was running second and Muldoon had that gigantic lead early I tried not to push very hard because I knew we would have another caution so that ended up working out,” Shullick commented. “He was running pretty hard and I just tried to wait and wait and wait.

“It feels good to win a 75,” Shullick continued. “We obviously were really strong tonight, but I really thought it was Otto’s race,” Shullick added. “He started in front of all of us and I just thought we would be chasing him but he got caught up in that wreck over there and unfortunately didn’t make it happen, but he will get one for sure. He’s fast.”

John Nicotra Racing is a Supermodified race team owned by John Nicotra and maintained by driver and chief mechanic Otto Sitterly. Nicotra Racing is based in Homestead, Fla., and Canajoharie, N.Y., and has won four International Classic 200s, six Oswego Supermodified track championships and now 32 total Oswego feature races since their debut in 2007.