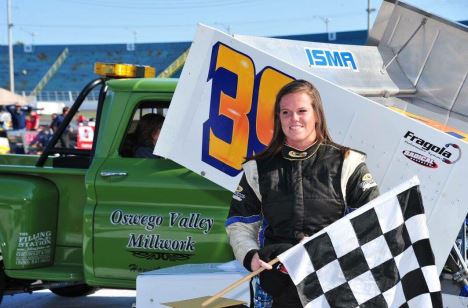 OSWEGO, NY (January 28, 2019) – It has been quite some time since we’ve seen a woman behind the wheel of a non-wing Supermodified at the Oswego Speedway. This season, however, that will change as Alison Sload plans a full season in the Novelis Supermodified ranks for 2019.

Sload, formerly Alison Cumens, is an accomplished campaigner on the ISMA trail. Despite not yet capturing her first feature win in a Supermodified, Sload brings a vast list of accomplishments and nearly 20 years of racing experience to Oswego Speedway as she teams up with John Nicotra and Otto Sitterly for a full-scale Oswego assault.

A quarter midget, three quarter midget, and now Supermodified veteran, Sload’s “true affection” for the Oswego Speedway began in 2011 when she picked up an ATQMRA victory on Classic Weekend, as her father Brent recalls.

In addition to her successes in winged Supers and TQ Midgets, Sload does have a small amount of non-wing experience in years prior. She piloted a car for Graham Racing in 2012 and only entered a couple of races before the Cumens Family then decided it was time to purchase a Vic Miller designed ISMA Supermodified.

For five seasons, Sload has spent many of her summers chasing ISMA races, and those efforts at times have been very gratifying. Her memorable performance in Oswego Speedway’s 2015 King of Wings event in which she finished a close second to Sitterly comes to mind right away.

Throughout the past two seasons, on the other hand, Sload and team have endured several struggles with the car. She did not race at all in 2018, but did marry fellow open wheel veteran Buddy Sload in the offseason. It was a break her team, in particular her crew chief, really needed.

“Although the ISMA racing family was very supportive of our team, traveling and keeping a Supermodified in racing condition has been a full-time job for me,” stated Brent Cumens. “For the first time in 20 years we did not field a car during the 2018 season. I was just worn out and needed a break.”

During this time, Sload watched the 2018 race season from the sidelines, while also observing her family school bus business continue expansion into New York State, something that makes heading back to the ‘Big O’ this coming season a little bit more logical.

“With the recent acquisition, both Alison and I have found ourselves spending more and more time in Upstate New York,” Cumens mentioned. “I decided to reach out to John and Otto and after a few calls and texts we were able to structure a one year deal for the 2019 season.”

Cumens, who has more than two decades under his belt wrenching on cars both for Alison and her brother Ian, says he “just wants to put Alison in a safe and competitive car” and “knows that John and Otto will make that happen for her.”

He continued by saying,”I think Alison is a bit apprehensive about having to knock a little rust off after a year out of the car, but I’m sure she will get back into the groove in short order. We are really looking forward to the upcoming season.”

For Nicotra, this marks the third consecutive year he will field two full-time entries at Oswego Speedway. He has won the last two championships in a row with two different drivers, first with Dave Shullick Jr. in 2017 and most recently with Sitterly last season. Bringing a new driver onboard can be quite challenging at times, but the accomplished car owner says it’s a challenge he is looking forward to.

“We’re excited to go racing with Alison and Brent this season,” Nicotra said. “It will be a big challenge for all involved but we’re really up for that challenge. Otto and the team will give their absolute best and do their part as always.”

Sitterly, who recently broke the record for most Supermodified track championships in speedway history, earned a mind boggling eighth track title last August, doing so while focused only on the No. 7 car. During that time, Shullick instead turned to new chief-wrench Jim Paternoster.

After lightening his work load a season ago, this year, Sitterly will again maintain two race cars on a full-time basis and is eager to welcome a new addition to Oswego Speedway’s premier division ahead of the 2019 race season.

“I’m looking forward to working with Alison and am excited about someone new coming to the Supermodified division at the Oswego Speedway,” Sitterly commented. “I’m sure that she will be a nice addition to the class.”

Sload echoed Sitterly’s thoughts, and is “very excited” about her upcoming opportunity with John Nicotra Racing at a place she has “adored” since her first victory at Oswego on that very memorable Classic Weekend seven years ago.

“My adoration for Oswego started when I won my first TQ feature there,” Sload said. “Even though I had to wait more than two years to win a feature, I’m really glad it happened at Oswego. Something about the atmosphere, people and race track really stole my heart that day.”

Fast forward a few years from that memorable moment, and Cumens stole the attention of Oswego’s fans in the aforementioned King of Wings event in 2015. She finished second to Sitterly by a narrow margin, crossing the start finish line just a hand full of car lengths behind the defending track champion.

“The 2015 King of Wings event was my first experience racing with Otto and it was great racing with him. Clean and respectful,” Sload recalled. “That night was one of my most memorable moments with ISMA and it gave me so much respect for Otto, John and the team. Even though I finished second, they all came down to congratulate us in victory lane. The entire group was so nice, and I kind of knew right then and there that at some point in my career I’d really like to drive for Nicotra Racing.”

As it would turn out, she had to wait a few years, but fortunately for Alison, the opportunity she had once hoped for has now become a reality soon to unfold in just a few short months at the Oswego Speedway. Approaching the task at hand with an open mind, Sload says her two biggest goals are to “have fun” and “learn from John and Otto.”

“This might sound cheesy but having fun and enjoying the opportunity to learn from John, Otto and the team are my biggest goals,” Sload explained. “Oswego is by far my favorite track and the fans are absolutely fantastic so I’m happy to get the opportunity to race there regularly. We could not have asked to be part of a better team or have better equipment and I think it will be a great experience for everyone.”

Those familiar with Oswego Speedway will realize that seeing women behind the wheel, especially of Supermodifieds, has not been much of a common trend over the years. First there was Jennifer Chesbro and more recently Jessica Zemken to name a few, but now it is Sload’s turn to continue carrying what tends to be a popular banner amongst race fans.

“I think it goes without saying that I really want to win a race,” Sload replied. “At this point, I’m really just looking forward to getting back into a Supermodified this season. The month of May can’t come soon enough.”

Oswego Speedway’s 69th season of racing is scheduled to begin on Saturday, May 25 with Jim Shampine Memorial Twin 50 features for the Novelis Supermodifieds plus full programs for the Pathfinder Bank Small Block Supers and the 350 Supermodifieds.